Looking for Alaska by John Green

Before:
Miles Halter is a unique boy, he can memorize the last words of famous people. Miles is just starting at Culver Creek High as a junior, a school known for its pranks and illegal activities. Just as his parents drop him off at school, Miles is warned not to take part in any action that would get him into trouble.

Chip, self-nicknamed the Colonel, is a confident, strong leader who also happens to be Miles' roommate. After a short time, the Colonel gives Miles the nickname Pudge (ironic considering Miles is tall and scrawny).

Alaska Young is one of the Colonel's closest friends. She is a very attractive girl. As soon as Miles lays his eyes on her, he  immediately falls for her.

The three friends go down to the  lake to smoke. There, the Colonel and Alaska tell Pudge about the killer swan and how the school works.Alaska promises to get Miles a girlfriend, not realizing that Miles actually likes her. She sets him up with Lara, a foreign exchange student.

In between classes, Miles spends his free time smoking and drinking  by the lake with Alaska and the Colonel. As Thanksgiving arrives, Takumi, one of Colonel's friends, and the Colonel leave Alaska and Pudge at school to return home for the holidays.

The number one rule at Culver Creek High is don't rat anyone out! Unfortunately, Alaska is accused of being a snitch. When the Colonel finds out about Alaska, he is not happy. He is so disappointed in his best friend. How could Alaska of all people be blamed for snitching?  Alaska comes up with a plan, a prank that she knew would redeem herself.

Preparing for the the pre-prank:
1. Alaska, Lara, Pudge, the Colonel and Takumi spend the night in a barn drinking, having a good time and planning out the prank.

2. Using fireworks, Miles and Takumi would force the Eagle (nickname for the principal) out of his house while the Colonel and Alaska focused on another part of the prank.

Days after the pre-prank planning, Alaska leaves her bedroom to make a phone call to her boyfriend Jake. When she comes back from the call, she is distressed and upset. Alaska ask the Colonel and Miles to distract the Eagle so she can drive her off campus. Without asking questions they agree. 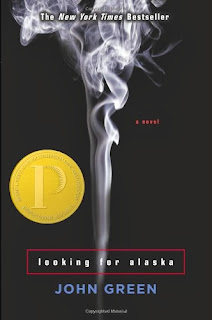 After:
Foreshadow: “I know so many last words. But I will never know hers.”

In the "after" part of the book, Pudge and the Colonel finally understand why Alaska fled in the middle of the night. To their surprise, her reasons were very different than what they thought. As they say, the prank must go on. As according to plan, the prank was a success.

Why did Alaska flee? What was the prank? Read Looking for Alaska to find out!

I really enjoyed reading Looking for Alaska. I think the hidden lessons one can learn from Alaska teach a very important and valuable lesson such as friendship and self-discovery. I recommend this book to teens who love drama and a twist on romance. Though the story line is capturing, I don't think this is great read for younger children. Language and  drinking are just a couple of reasons why I don't recommend this book to children under the age of 14.

Favorite quote:
“The only way out of the labyrinth of suffering is to forgive.”
"Straight and fast"

I have to go read another book,
Mollie