Th1rteen R3asons Why by Jay Asher 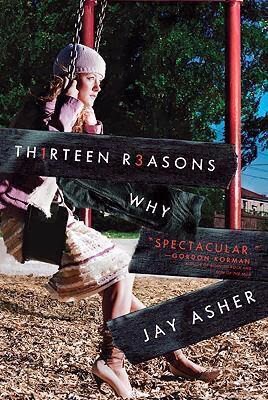 How would you feel if you arrived home to a strange package on your porch? You open up the package to find cassette tapes telling you the thirteen reasons why your friend/ classmate Hannah Baker committed suicide.Your first thought would be to see who sent you the package. Just your luck-no return label. After you listen to the tapes, your life could change for good. Are you prepared to live with the guilt?

Clay Jensen is an average kid who is friends with Hannah Baker- just so happens he has a crush on her.  Like everyone else, Clay is upset when Hannah dies. He can't understand why she did what she did.

One day Clay returns home to school to find a package wrapped in brown paper with no return label on his porch. He opens the package to find 7 cassette tapes wrapped up with a note attached.  Clay takes the package into the garage where he knows there is a cassette player.

Rules:
1) Listen to the tapes, following the map is optional (Clay found a map in his locker a while ago and had no thought about it until he listened to the tape).
2) Once you are done with the tapes, pass it on to the next person- their story comes after yours
*A second set of tapes were made, if you don't pass the tapes on, everyone will hear what was on the tapes- they will know how you had a role to play in the suicide.

Clay listens to every tape waiting to hear his name- wanting to know what role he had in Hannah's death. As the the stories progress, Clay follows the map very carefully to get a better understanding of Hannah's life.

Listening to the tapes made Clay mad. How could her friends act this way?  How could they not notice? His story. Clay finally hears his story. He cries. He knows he could have done something, but he isn't sure why he didn't. Clay  continues until he finishes all of the tapes. Do you blame him? Would you know how to react if you heard your name on the tape?

What were the thirteen reasons why Hannah committed suicide? Was is possible to have stopped her? What impact did Clay and his friends have on Hannah and her death? Read Thirteen Reasons Why to find out!

People often wonder why a person has committed suicide, what was the "snowball effect" that causes them to make their decision. Thirteen Reasons Why was  written in a way that we can understand that every action has an affect on a person and their decisions. Whether or not we choose to notice their cry can only make their decision that much stronger.

The fact that the book was written in the point of view of a teenager who committed suicide giving us her story was really cool and a very different kind of book than I usually read. I think the idea and  message of the story is  what made the book more enjoyable. The book itself has good intentions and ideas, however the actual story was neutral, just another story. I think the way it was written is unique and defiantly worth reading, unless you are under the age of thirteen or fourteen for graphic and topic reasons.


Well I am off  to read another book,
Mollie