The Magic Half by Annie Barrows 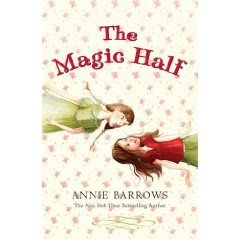 This book is about a girl named Miri. She has middle child syndrome. She has twin older brothers, Robbie and Ray and twin younger sisters Nell and Nora. Miri and her family just moved into this old house. Robbie and Ray told Miri that there was buried treasure somewhere on the property. While Robbie, Ray and Miri were out looking for the treasure, one of the twins broke Miri's glasses and Miri hit her brother. Miri was punished and sent to her room. While she was sitting in her room, Miri found an old lens taped to her wall. She looked through it. The next thing Miri knew, she was twirled into a whole new place, or so she thought. Miri then realized she was at her house 70 years earlier. She met a girl named Molly who lived in this house. Molly told Miri that she was sent to save her and how her cousin is so mean. Miri said she would do her best. Does Miri save Molly? Do Robbie and Ray find the treasure? Is Miri able to return home? What kind of a blogger would I be if I gave you the answers and the end of the book. Ok so blame me but you have to read the book.

I read the book, and it was great. This is a great book for children in 3rd grade to 5th grade. This is also a great book for anyone who likes mystery, magic and fantasy.
Well, I got to go read.
Mollie
Posted by Mollie's Reviews at 5:35 PM 2 comments: