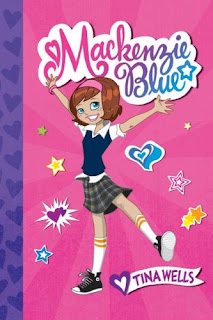 This book is about a girl named Mackenzie Blue. Her best friend just moved to London and she is starting middle school. On the first day of school Mackenzie bumped into a boy she likes and she accidentally lost her diary. The next day at school Mackenzie meets this new girl named Chloe. Chloe and Mackenzie become best friends with Jasper too. A few days later when the 3 friends entered the music room, something from Mackenzie's diary was written on the board. She need to find her diary, and fast. She thought her friend Chloe took it. Mackenzie wanted to sign up for a talent show, so she has written a song in her diary. Unfortunately whoever found it knows the song and all of her secrets. The next day another one of Mackenzie's secrets ends up on the white board in her music class, she is very upset. Mackenzie thought her new friend Chloe took it. When Chloe wasn't looking Mackenzie went into her locker and looked through her books. Chloe saw her and was really mad. Chloe didn't talk to her for a very long time after that. When Mackenzie found out Chloe didn't do it, she thought Jasper did. She went over to his house and went through all his stuff. Unfortunately she was caught and both her mom and Jasper's mom was mad. Now Mackenzie had no friends. what was she going to now? She decided to focus on writing her song. With her brother's help, the two of them are able to enter the talent show. Does Mackenzie win the show? Does she become friends with Chloe and Jasper again? Who took her diary? Does Mackenzie make new friends? Read this book to find out what happens cause I am not going to tell you.

Got to go read Bye,
Mollie
Posted by Mollie's Reviews at 10:05 AM 2 comments:

Charlie Bone and the Invisible Boy by Jenny Nimmo 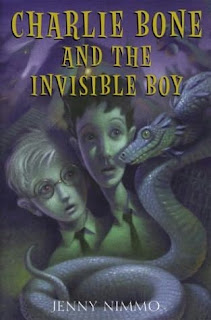 This Book is about a boy named Charlie Bone. He is endowed, which means he has a very special talent. He can hear voices inside pictures and paintings and go into them. It was time for Charlie and his friends to go back to school. One of Charlie's friends, Emma had been trying to help this invisible boy named Ollie. Charlie decided he is going to help her. There is just one problem. This girl named Belle, who happened to be related to Charlie was trying to stop them. Charlie and Emma did everything they could to rescue him. They asked their friends, and Charlie even went into a picture to ask a wizard for help. Unfortunately Charlie accidentally let the wizard out. That was a big problem. Do Charlie and his friends Save Ollie? Who is Belle really? Where did she come from? Does the wizard help Charlie? Does he return back to his painting? Read this book to find out. This is a great book for anyone who like this series and for kids 10 and older.

Enjoy,
Mollie
Posted by Mollie's Reviews at 9:46 AM No comments: