Charlie Bone and the Time Twister by Jenny Nimmo 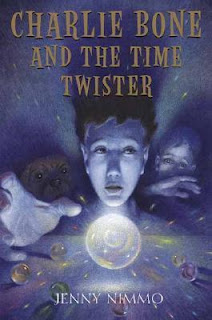 This book is about a boy named Charlie who is "endowed", which means he has a very special talent. When Charlie goes back to school, he meets a very strange boy named Henry Yewbeam. What Charlie later finds out is that Henry is related to him. Henry has been sent to the future by this marble called the "Time Twister". When Henry was in the right time with his brother James, Henry was playing marbles by himself . Henry's mean and horrible cousin, who doesn't like him, throws the Time Twister near him. Not knowing what it is, Henry picks up the marble, looks at it and is whisked into another time. Since Charlie Bone and Henry Yewbeam are related, Charlie tries to help him return to his normal time. With great trouble and a lot of accidents and with the help of his friends, Charlie is determined to help Henry. There is only one problem. Henry's cousin is trying to get rid of him. Will Charlie and his friends save Henry? Does Henry die? Does Henry have get to see his brother again? To tell you the truth, I'm not telling you so Ha. No, what I'm saying is read the book. I'm telling you this is a great book for kids 10 and older.
Enjoy, I have to go read another book!
Mollie
Posted by Mollie's Reviews at 7:31 PM No comments: 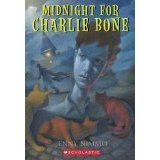 This is a book about a boy named Charlie Bone. One day Charlie hears voices when his mom gives him this picture that wasn't his. Somehow, his grandma, Grandma Bone, found out and called her sisters over. Grandma Bone and her sisters were part of a family named Yewbeams. This was a special family because they were "endowed", which means they have special talents. One day Charlie's aunts come over and gave him pictures to look at and told him to tell them what he hears. After a while, Charlie's aunts and grandma tell him he is going to the Bloors Academy. Charlie went to the old bookstore to return the picture he had gotten by mistake from his mother. The woman named Mrs. Ingledew, gave him this robot dog that had a tape recorder in it. She also gave him a bag that she never wanted to look at because Mr. Tolly (someone who she is related to) gave away her sister's baby for whatever was in the bag. Everyone wanta what was in the bag, and Charlie had to hide it really well. A few days later, Charlie found out that he needs to rescue Mrs. Ingledew's niece, who goes to the Bloors Academy. Charlie is finally sent to Bloors Academy, where he meets his friends Olivia, Billy Raven, Fidelio and a few others. But, Charlie and his friends also run into trouble with Manfred Bloor and Asa. They were the mean kids in school. Somehow, everyone finds out about the bag. (I'm not going to tell you how they find out, that would be mean.) Does Charlie have enough time to save Mrs. Ingledew's niece? Do Charlie and his friends succeed at doing this? How does everyone find out about the bag? Who has been telling all of Charlie's secrets? (The answer may surprise you). This is a great book for anyone who is 10 or older.
Well, I must go read the next book in the series.
Mollie
Posted by Mollie's Reviews at 8:23 PM 2 comments: