Percy Jackson and the Sea of Monsters by Rick Riordan 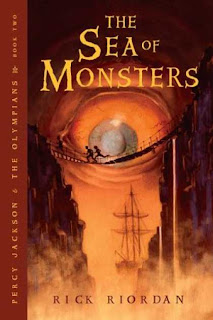 It is back to school time for Percy. One day at gym, Percy and his friend Tyson, who turns out to be a cyclops are playing dodge ball with a bunch of monsters. The monsters blow up the school. Annabeth comes and rescues Tyson and Percy.

The three of them go back to Camp Half- Blood. Something was strange about the camp. Thalia's tree, (the tree that protects the camp and is the daughter of Zeus) was dying. Chiron, the camp director and Percy's teacher wasn't there. Percy and the rest of the camp learned that Tyson, the cyclops was Percy's brother.

One of the children of the God Aries, was sent on a quest. Grover had left camp to find the god Pan. Unfortunately Grover was kidnapped by a cyclopes. Luckily, the cyclops was guarding the golden fleece coat that could also heal Thalia's tree. All Percy and Annabeth had to do was rescue Grover and get the golden fleece.

Annabeth and Percy went through a lot of trouble to sneak out of camp, save Grover, and get the golden fleece and manage to stay alive.

Do Annabeth and Percy save Grover? Do they get the golden fleece? What happens to Thalia's tree? Read the next book to find out.

I recommend this book to anyone who likes mythology and fantasy.

Mollie
Posted by Mollie's Reviews at 4:02 PM No comments:

Percy Jackson and the Lightning Thief by Rick Riordan 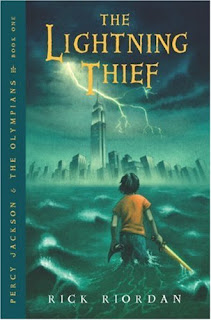 This book is about a boy named Percy Jackson. Percy lives with his mom and step-dad in Manhattan. On a school trip to an art museum with his friends, Percy is attacked by a monster. Nobody but Percy, his friend Grover and his teacher Chiron can see the monster. Because of this, Percy is kicked out of school.

Percy and his mom go on a vacation to a beach where they have a house and love to be. A little while after they get to the beach it starts to rain. Grover, who is a styr (half human half goat), tells Percy and his mom to leave. Percy's mom takes Grover and Percy to Camp Half-Blood. This is a camp for children who are demigods or half gods. (One of their parents is a mortal and the other is a god). On the way to the camp, a manitore captures Percy's mom. Percy just destroys the manitore in time before it killed him.

At Camp Half-Blood, Percy learns to fight, and prepares for a quest. At his first capture the flag match, Percy learns that he is the son of Poseidon, the god of the sea.

Now that everyone knows Percy is the son of Poseidon, Percy gets a quest. His quest is to find Zeus's lightning bolt. Zeus thinks Poseidon took it. Poseidon, though could not have taken it, because gods can not take each others powers. Unfortunately Percy only has until the winter solstice to find the bolt. If he doesn't find the bolt, there will be a huge war that could destroy the Earth. Percy takes Annabeth, the daughter of Athena, and Grover, the styr, on his quest to help him.

The Kids run into a lot of trouble along the way. They meet gods in the near future that might want to kill him, and a lot of other problems too. Annabeth, Grover and Percy find themselves in the underworld with the god Hades trying to rescue Percy's mom.

This is a great book for anyone into Mythology and fantasy.

Enjoy, i have to go read more books from this series,
Mollie
Posted by Mollie's Reviews at 3:07 PM No comments:

Just Another Day in My Insanely Real Life by Barbara Dee 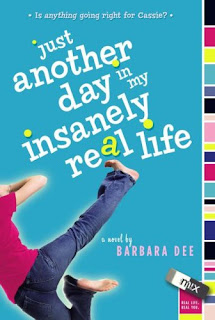 Twelve year old Cassie's life flips upside down. She loses her nice big house, swimming after school, her A's in English and her best friends. Oh, and one more thing: her father moves away.

Whether she likes it or not, the responsibility of taking care of her siblings is thrusted into her hands. While her mother is at work (which is pretty much all day) Cassie has to shop for food, make dinner and take care of her little brother, Jackson. Of course, her teenager sister, Miranda, never helps out. She's too busy studying for chemistry at her best friend Madison's house and giggling about Adam Klein. Mr. Mullaney, her English teacher, doesn't appreciate the effort Cassie puts into her work. Why should Cassie even try? To top it all off, her best friends are turning into really nasty people.

Maybe, Cassie's life will come back together. She's already partway there with a boy that might like her, a new friend that might not be as bad as she thought, and a novel she is writing with daring adventures.

Will Cassie ever know what made her dad move away? Will her life ever be the same again? Find out about this poignant, funny, sweet girl as she makes her way through her insanely real life.

This review was written by Ruthie.
She is a girl who likes to read and write stories and poem.

Thanks to Ruthie for this great review.
Posted by Mollie's Reviews at 2:35 PM No comments: