Little Women and Me by Lauren Baratz-Logsted 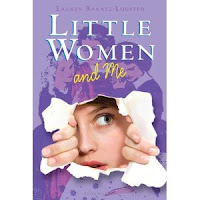 Emily hates being the middle child. The boy she likes, likes her older sister, Charlotte. When he isn't crushing on Charlotte, he has the hots for Emily's younger sister Anne. In other words, Charlotte and Anne get everything because they are the youngest and oldest daughter, leaving Emily with whatever is left.
An English assignment has driven Emily crazy. Which book should she choose? Maybe I should start from the beginning.
Emily's English teacher gave her an assignment to write an essay about three things she likes about a book, and one thing she would change. Emily first had to decide which book to choose. Finally she chose Little Women. Emily's plan was to change the fact that Beth dies and Laurie ends up with Jo, not Amy.
As Emily starts to read Little Women, when she is whisked into the story. Emily is now part of the book as the fifth March Sister.
Emily has to adapt to the way of life in the 1600s. And not only that, but she has to act as if she has always been part of the family.
Jo and Emily bump heads quite often because Jo has such a strong personality and Emily starts standing up for herself.
Emily has a very hard time making things right in the story. The worst part is, the only things she remembers is what happens in the original story.
Emily learns that nobody is perfect. She learns the life lesson that jealousy gets you nowhere.
Unfortunately Emily learns the hard way. Not only is she the middle child at home, but she is also the middle child in the story. Because of this, Emily has to learn to deal with her jealousy of Jo liking Laurie and the fact that Laurie doesn't like her, he likes Jo. Emily also has to understand that Jo is the writer of the family, and even though Emily loves to write, writing is Jo's thing.
As time goes on, Emily begins adapting to the way of life in the 1600s. She even stops worrying about her "real" life in the "real" world.
Emily is waiting for the opportunity so she can prevent Beth from dying. And no matter how hard Emily tries, she has no ideas how or when Beth is going to get sick.
Eventual Beth becomes sick. Emily tries to get rid of her sickness, but only delays the fact that Beth dies.
Does Emily stop Beth from dying? Will Emily make it home and out of the book? Does Emily learn that it is okay to be the middle child?
Read Little Women and Me to find out.
I really enjoyed this book. I thought it was a great twist on Little Women. However, I do recommend reading the original first because then this book makes more sense. I think any girl 12 years or older will like reading.
Well I have to go and read some more,
Enjoy,
Mollie
Posted by Mollie's Reviews at 5:18 PM

Email ThisBlogThis!Share to TwitterShare to FacebookShare to Pinterest
Labels: Little Women and Me Lauren Baratz-Logsted