The Serpent's Shadow by Rick Riordan 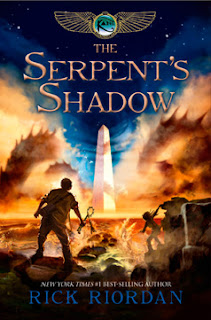 Sadie and Carter Kane, two young magicians, are needed once  again to restore Ma'at (order) to the world. Apophis, the Chaos snake is loose and attempting to destroy the world. It is up to Sadie and Carter to stop Apophis. Can they do it?  Of course, along the way these two magicians run into some trouble.

The two magicians need the spell from the Book of Thoth so they can destroy Apophis's shadow. Sadly, all of the books have been destroy... except for one. Setne, a ghost magician who wrote the Book of Thoth knows where the final copy is. Unfortunately, Setne, an evil demon, whose heart is about to be weighed will most likely be destroyed taking the secret location with him. Sadie and Carter along with the help of their friends, Zia and Walt, have to convince Osiris (Sadie and Carter's father), who controls Setne's trial, to let them take Setne, and retrieve the final copy of the Book of Thoth. Osiris is reluctant at first because Setne is a very dangerous ghost but once he hears his children's plans he understands what he must to do.

Carter and Zia go with Setne to get the Book of Thoth. Of course Setne is not going to be an easy ghost to deal with. After all he is EVIL. With plenty of trouble and near death experiences, Zia and Carter FINALLY  get the book. Sadie and Walt try to rescue the shadow of Bes, the dwarf god, to bring him back to life, all while keeping themselves alive during a hunting game with the god Neith.
Are Walt and Sadie able to save Bes' shadow and bring him back to life?

Setne takes Carter and Zia to Apophis' shadow which they plan on capturing in order to destroy Apophis. Setne makes the process very difficult. Luckily, Sadie drops in at the right time and Carter and Sadie are able to capture the shadow.

Now for the hardest part, defeating the GIGANTIC snake. Carter, Sadie and Zia along with many of the gods and few magicians attempt to kill Apophis. But are they successful?


Not only does Sadie run into magical trouble, but boy trouble as well. She is torn between Anubis, the God of Death, and Walt. Unfortunately, Sadie's problem gets worse. She is forbidden to to see Anubis, and well, Walt is dying. Sadie needs both Anubis's and Walt's help to defeat Apophis. Which boy does Sadie end up with?


Read The Serpent's Shadow to find out.


I would recommend this book to anyone who loves magic, action and a little bit of romance. It is a thrilling book worth reading. I absolutely love reading  Rick Riordan books and this is just another amazing one.


I have to go read some more,
Mollie